So, I decided to challenge my own comfort zone, and participate in an online Old School tournament this June. None less, than the very successful DOOM – I believe it is an acronym for Danish Online Oldschool Magic. Nice acronym!

Actually everything about this series of online tournaments seem great with upwards or maybe even above 60 players in the May event. Streams to follow. Great games. Beer – friendly atmosphere with no prices. A great time all in all it seems. Check out thedoomcrew.net.

For June there were some very specific banned rules for the tournament, namely these:

Games are best of 3, with decks of minimum 60 cards, and no sideboards. Every card besides basics are restricted. Oh, and these cards are banned:

So, singleton it is. Hmm.

I really like to play combo. Could it really be done, within these very confining walls of bannings? Let’s give it a try.

Combo decks consists of – as I am sure my readers are aware – some game-winning combo. Some protection and some way to consistently find the cards required for the combo. All of these things are very strained due to this being a singleton tournament. But it must be possible!

The core of the deck: The Combos

So what are the most efficient combos in Old School:

Yep. That’s in. So we are at least in red and green colors – perfect for comboing, right? Right??!

Now we also want to invest somewhat heavily in blue…

Well that is off to a good start. Not only are these some very potent combinations of cards, they are also some of my favourite cards. Speaking of favourite cards. And combo. Let’s talk a bit about Time Vault.

Besides the obvious Twiddle-Time Vault, there are these combinations that I can think of: 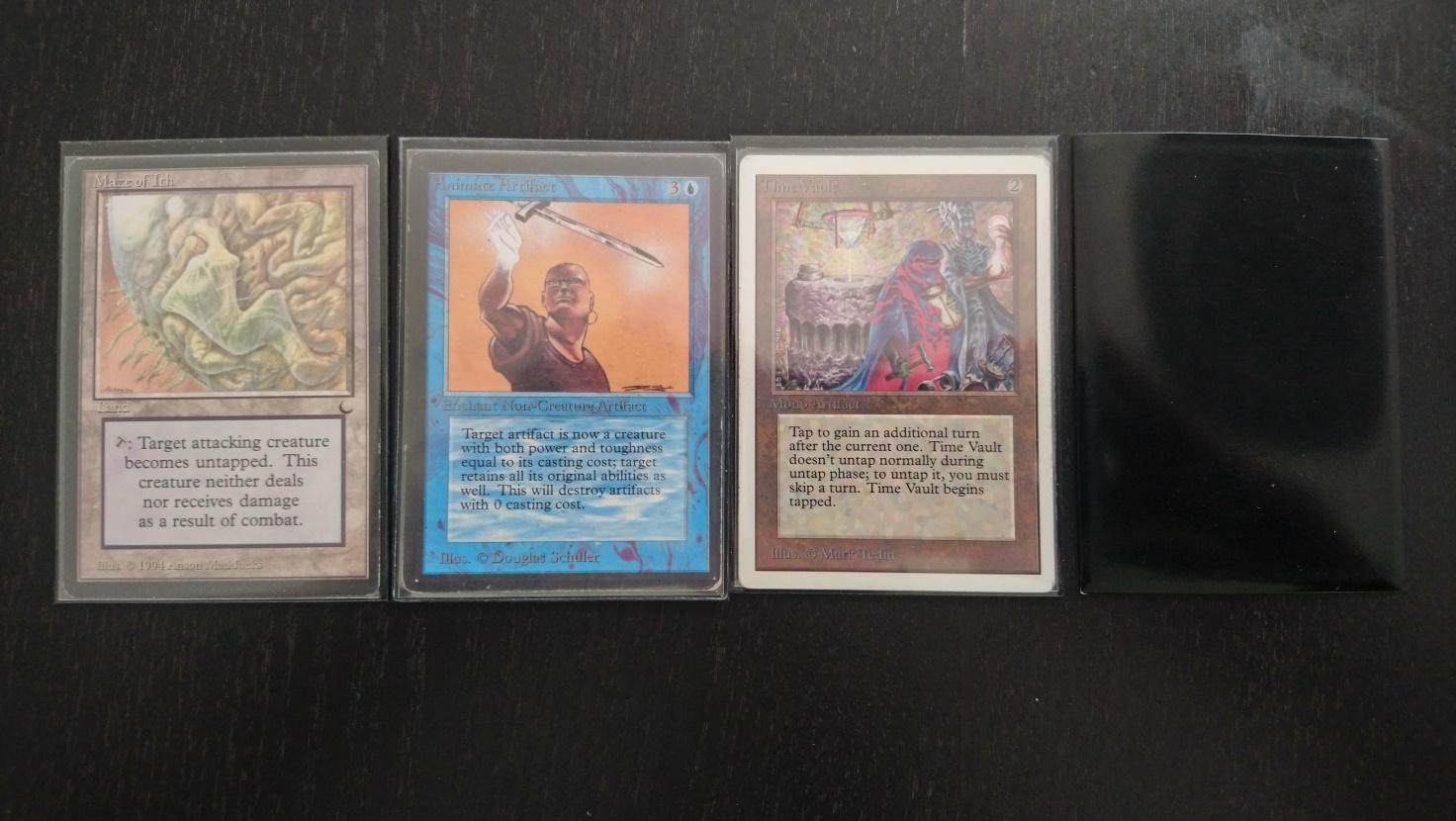 (The black sleeve should have been a ley druid or Candelabra of Tawnos. I apologise for the missing Druid and Candelabra – I can’t seem to find my copy of Druid, and I don’t own a Candelabra. Yet.)

A short explanation of this combo may be in order: animate an untapped vault, attack with it, untap it with maze, tap for an extra turn, untap maze with druid/candelabra, untap the animated vault again with maze. Rinse and repeat next turn…

And then, there is almost a combo here: 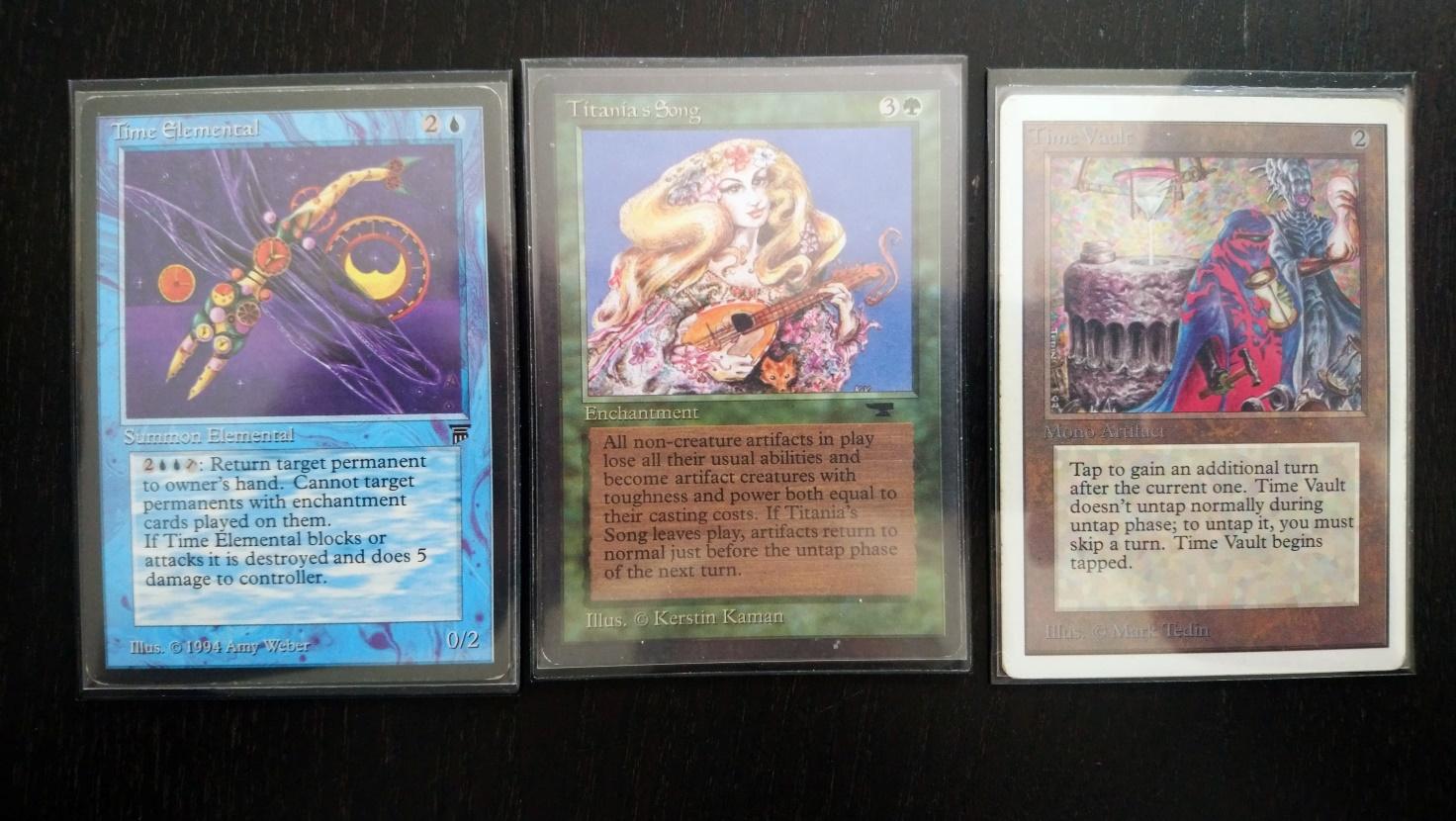 Slam Song, wait for your next untap step, where Time Vault will untap, because it no longer has any abilities. Then Bounce Song with elemental, tap Vault for an extra turn. Play Titania’s Song again.

Except, alas! For some reason Titania’s song has the very odd last sentence on it, which makes this not really a combo. It is almost as if the card is specifically designed to not be absolutely broken with Time Elemental and Time Vault. Damn, I thought I had it. But let’s throw in Titania’s Song anyway. It can still kill an unsuspecting opponent.

Phew! Those are a lot of combos. Can we find even more, to jam in?

Well maybe not game-winning, but this is “fun”, and can help protect us, until we find some way to kill: 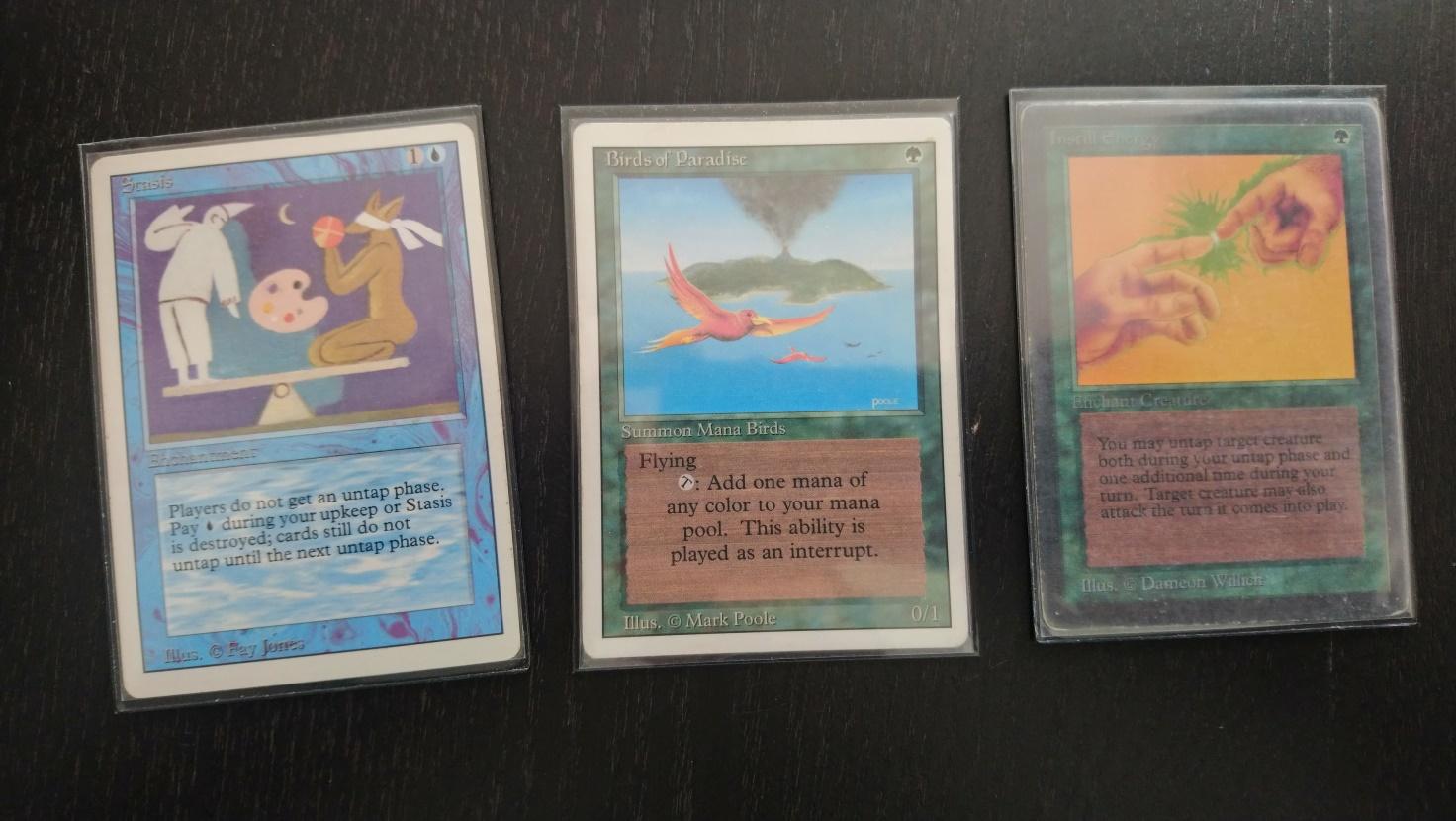 So, we found out what combos, we want to play. Now I need some way to find them. Being singleton and with power, Library of Alexandria and Braingeyser banned, it is no easy task to assemble these combos.

But we do have these (actually we also had access to Demonic Tutor. For some reason I just read the above-mentioned ban list as if the Tutor was banned. We should probably have splashed black for the single Lehrmeister!):

These are actually some very strong cards! I know Howling Mine is always dangerous, but if we want to have any shot at actually winning anything, I think almost every possible draw or tutor must be in here.

One could argue including cards like Jalum Tome and Sindbad. The reason why I don’t, is this: I don’t own any of the cards, and with regards to Sindbad, unless you have Sylvan Library on the board, it is somewhat dangerous to activate the adventurous guy. You could end up binning your win-con. Jalum Tome, on the other hand, seems very fine here.

So we have a way to win (-ish) and we have some cards to find the win. Sort of.

Finally we may want something to protect us, while we are trying to find our pieces. Counters are a good way. And, of course, why would we play without the orb?!

Let’s hope it is a VERY slow format…

Besides these, there are, of course, also the Stasis package, the Maze of Ith, Time Elemental, the x-spells for removal of dangerous creatures in a pinch (I will also include Stream of life. 2 reasons: I love the card, and it can actually buy us some time).

Before going to the mana/lands part of the deck, I will also throw in a Copy Artifact and The Hive for good measure, and probably some kind of crazy combo I can’t really figure out. The Hive-Animate Artifact-Jandor’s Saddleback and 12 mana makes me 2 fliers a turn. That seems probable… There must be something else more bonkers to do with The Hive? Maybe just play it, next turn play Song – attack for 5? It is a fine card, that can help kill the opponent or protect us in a long game.

The Mana and the deck!

Again: Singleton. Old School. We don’t have a lot of options here. 3 duals, a City of Brass, a Mishra’s Factory for blocking and shenanigans with Druid/Candelabra and then basics for the rest. Also, of course, Birds of Paradis, Fellwar Stone and Untamed wilds. Crazy fixing! We also include mana vault for a boost. It also combos with Power Artifact, but only if we can use unlimited mana in our upkeep. I don’t think, we really can…

(Remember the 3 black sleeves are Mirror Universe, Candelabra of Tawnos and Ley Druid). I actually really like this deck. I love looking at it. But cards are here to be played!

So I took the pile for a spin against a magic simulator. I know, I know, the AI of such simulators is not in any way comparable to a human adversary, but unfortunately I didn’t have the time to test this deck properly. I decided to test against a rather dull, but also rather aggressive RG Aggro deck. And a very slow, very controlling UWB deck.

A well-tuned (again, -ish), combo-deck against a very bad AI? What could possible go wrong?

I only played 2 best-of-3 against each deck. Here is how it went down:

He starts with a land. I get a turn 1 howling mine via mana vault.

I play maze of ith and Candelabra, but he finds all kinds of removal, while he keeps slamming creatures. That was a 0-1.

A stream of life regrowthed keeps me in the game for some time. But staring down a board of Barbary Apes, Elvish Archers, Argothian Pixies and 2 land destruction spells… I die. With Animate Artifact and Instill energy in hand. Almost there! So sad.

I actually have a rather powerful start with turn one Birds into Tome and later Wheel. But I just don’t find any of my combos (LOTS of lands) nor maze in time.

Short version. My deck is very slow. My opponents’? Not so much. I do find myself a maze of ith, but aganst his 2 land destruction spells, it doesn’t seem to matter much…

Okay, so playing against creatures may not be exactly what we want to do. Let’s play some controlling dude instead, then. That is the trick. Let’s see how we fare against the UWB Control build.

He fills the board with Moat, Island of Wak-Wak and other great stuff for keeping creatures at bay. I try to develop my mana. I counter an Icy, he counters my attempt to destroy his The Hive. I copy his The Hive. He almost taps out (leaving just an island and a tundra untapped, with 1 card in hand) to play his Serra Angel.

I play power artifact on my basalt monolith. Make a lot of mana. Tries to disintegrate him. Closes my eyes (he could be holding a Counterspell or a Mana Drain). Disintegrate resolves and the AI bot simply turns into dust. WIN!

I go turn 2 Sylvan Library. Turn 3 Howling Mine and Maze…

He plays Su-chi, and then Clones it the next turn: That is some very serious beats! I destroy one Su-Chi with a Chaos Orb.

He plays Greed, Icy, Jalum Tome! He must find some counters!

He gets greedy! Too greedy (and probably bad, because he is an AI). I End up Channel-Disintegrating him. Maze of Ith and Candelabra of Tawnos did some serious work here!

I keep a hand of 4 lands, Winds of Change, Untamed Wilds and Fellwar Stones. Then I draw lands for 4 rounds. But it is not really a problem, because my opponent doesn’t really do much. Probably sits on a lot of counters…

I manage to simply burn him with 2 large, red x-spells. He did not draw anything relevant apparently.

I keep a slow hand, but with Maze of Ith and Candelabra. That should make me able to survive for some rounds…

It is a veeeeeery long game. In round 86 or thereabout, I manage to land a Mirror Universe through his Counterspell. I Mana drain his counter. Second main phase: 2 colorless in the pool. Draw a card with my copy of his Jalum Tome –Time Vault! Play it. Twiddle it. Swap lives 2 for 25. Disintegrate him… Sometimes we just do unnatural stuff!

First of all, if you’re still with me through all this: Thank you!

It is very difficult to say whether the deck is playable in this strange format or not. If the other players are trying to control the game (that is, board control), or are trying combo themselves, this is probably not a too shabby deck. If they play Grizzly Bears or other stuff from the wilds: Don’t enter the room!

I did not sleeve this deck up for the tournament. I will tell you, what I eventually played at some point, when the tournament is over.

Best of luck to all of you Old School mtg’ers out there!